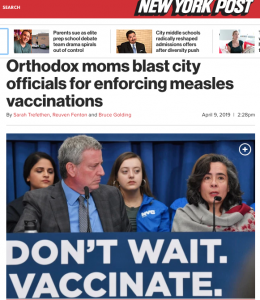 Below features excerpts from the recent article by the New York Post followed by a personal response from Dr. Dale.

Two Brooklyn moms whose kids all had measles blasted city officials for ordering mandatory vaccinations against the disease on Tuesday.

“I was glad that they got it the way God intended them to get it,” said Esther, 25, an Orthodox Jewish mother of three.

Dr. Dale: I will often hear from Christians that God can work through science and thus it is God’s will for us to be vaccinated. But would any Christian say that it is God’s will and that the only way for God to have protected children from dying from infections like the measles was for other children, innocent children, to have been sacrificed?

(To understand more on this, read through another response I created to the article titled “Scientists say fetal tissue remains essential for vaccines and developing treatments” in which I go into more detail on the idea that aborted fetal tissue is “necessary” for vaccines.)**THIS POST IS CURRENTLY IN THE WORKS AND WILL BE UP SOON,CHECK BACK SOON!**

By saying that this would be the only way to protect our children, is in no way Christian or in alignment with God’s will for us. God wants all children to be healthy and well, but when “Scientists” saying that aborted fetal tissue is “absolutely necessary” for making such vaccines, they are saying that the only way God could protect His children is by sacrificing the lives of others, and this is simply not true.

Secondly, “scientists,” or in this case “pro-vaccine scientists,” like to take claim for something that God had already done, simply by way of better sanitation, clean water, and more access to nutritious food. All of which are biblically based ways of living. The death rate from measles, for instance, had declined by more than 98% before the vaccine was available. Check this link out to verify using the U.S. vital statistics and all you have to do is look at the mortality rate graphs and you will see that in 1963 the mortality rate from measles was basically down to zero, statistically speaking when looking at the mortality rate from 1900 till 1963. By saying that vaccines are the only way to protect our children and without them there would still be massive deaths is a lie. God’s plan will never involve the use of deception for achieving His will.

She also said she’d be willing to pay the $1,000 fine the city has threatened to impose on any Williamsburg residents who refuse to get vaccinated.

“My children are more important to me than any money in the world,” she said.

Dr. Dale: Money should never be placed above the lives of any child. Yet, the action taken by the pharmaceutical companies who make these vaccines has proven that their love of money is greater than the value they place on human life. To show proof of this, I will link several examples. This is not an exhaustive list, but it should suffice if you need proof that preserving human life is not the top priority of Big Pharma. After all this, I can not understand how anyone, parents especially, or even doctors for that matter still trust the word of vaccine manufacturers. MSNBC’s “Rat of the week” Where Bayer Corp. knowingly infected children, both in the U.S. and overseas, with HIV for profit. Read about it here also.

Her pal Gitty, 28, who’s also an Orthodox Jew, said, “I don’t think it’s up to the city to mandate such things.” “God created all humans perfectly. My children are perfect and beautiful,” the mother of five said.

Dr. Dale: I must say I agree, to say we need all these things to protect our children would, in essence, be saying that God didn’t make our children complete and capable of fighting off such diseases. It would also mean, that if one says vaccines are “necessary,” then one is, in essence, saying that God did not provide for those things necessary for any child before vaccines were available. This is simply not biblical. From the beginning to the end, God provided all we would need. Sickness and disease are because of the fall of man and because “men” are greedy or glutinous. Really, when you think about it, it’s true. Take this as food for thought: Malnutrition worldwide is the leading cause of death and unclean water is second. These two are the primary causative factors for death during any infection, including measles, yet, instead of fighting world “hunger” and malnutrition, we spend more money on vaccines that are sold for profit. (Watch this video for more information on the top risks factors for someone dying from a diease)

“It’s my religious belief. I will never put anything in my child to alter their immune system.”

Each woman was pushing a baby in a stroller when they showed up outside the Williamsburg branch of the Brooklyn Public Library, where Mayor Bill de Blasio and other officials announced the vaccination order.

They said they learned about the news conference from friends in the neighborhood who also oppose vaccinations.

“By not vaccinating, you’re endangering not only yourself but your family, your neighbors, people that want to be safe,” he said.

Friedman also quoted a teaching from the Talmud, the book of Jewish law, that says “You must do everything to safeguard yourself.”

Dr. Dale: I am not familiar with the “Talmud,” but when I search this statement, I cannot verify this and read more into its context. It is often that I will see those who promote vaccines and drugs to be misrepresenting the statements made in the bible. In response to this, I would ask for people to simply study the bible and the true meaning of the word Pharmakeia and even look at the symbols of medicine which are all represented by serpents. I do not believe this to simply be coincidental. But how is one “safeguarding themselves” by blindly accepting a product produced by murderers and thieves? That is what the drug/vaccine companies have done. I would say we could just as easily use that statement to deny vaccinations because I would not be “safeguarding” my children if I were to accept vaccines from a company that cares more for money than human life. I would not be “safeguarding” my children if I accepted on “faith” a vaccine that I had no knowledge of from a company that has killed people for profit, stolen money, lied, and bought prostitutes for doctors to get them to sell more of their products.

Dr. Dale: I would say that either this man is not knowledgeable of what the drug companies are doing when they are creating and selling their vaccines and drugs or he’s not aware that Merck, the only supplier of the MMR vaccine, is currently in court for lying about the effectiveness of this vaccine when it comes to the mumps portion of this vaccine at least. So, yet again, I wish to assure everyone that God’s plan would never include lies for its completion.

Officials said 285 Williamsburg residents, virtually all of who are Orthodox Jews, have been infected with measles since October.

Dr. Dale: Yet, somehow all have fought off the measles without issue. Lord knows the Big Pharma paid media would be blasting the issue even harder if even one of those children were permanently harmed or died from the measles. Before the measles vaccine, measles were stated to be a “self-limited disease” with very rare complications and deaths. Sadly, that truth has been distorted since there is profit to be made now.

The outbreak has been blamed on travelers from Israel, where more than 3,400 measles cases have been reported since March 2018.

Trends in Infectious Disease Mortality in the United States During the 20th Century https://jamanetwork.com/journals/jama/fullarticle/768249

MSNBC’s “Rat of the week”

The 112-Year Odyssey of Pertussis and Pertussis Vaccines-Mistakes Made and Implications for the Future.

Acellular pertussis vaccines protect against disease but fail to prevent infection and transmission in a nonhuman primate model.

Does the Flu Vaccine “Shed”? Clearing Up the Myths and Misunderstanding