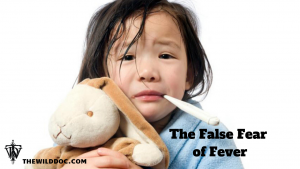 Researchers from Roswell Park Cancer Institute found that a higher body temperature can help our immune systems to work better and harder against infected cells. “Having a fever might be uncomfortable, …but this research report and several others are showing that having a fever is part of an effective immune response.”

Study: Fever Treatments May Cause More Flu Deaths-(this link is no longer available)

“People often take or give their kids, fever-reducing drugs so they can go to work or school. They may think the risk of infecting others is lower because the fever is lower. In fact, the opposite may be true: The ill people may give off more virus because fever has been reduced.” Fevers can actually help because they can lower the amounts of virus in a sick person’s body due to the viruses replicate less efficiently in higher temperatures.

The effect of antipyretic therapy upon outcomes in critically ill patients: a randomized, prospective study

Fever is considered a key factor of innate immunity aimed to fight infection. A new investigation reports an association between the use of antipyretic drugs with poorer outcome among patients with sepsis. In contrast, a high temperature in non-infectious intensive care patients is associated with higher mortality.

The tests showed that those who had experienced prolonged febrile seizures (convulsions triggered by a fever) were normal, the American and British researchers said. The study authors said they were surprised to discover that only one child had mesial temporal sclerosis, a type of brain damage that is most common in temporal lobe epilepsy. This suggests that the connection between febrile seizures and this condition is weaker than previously believed.

The Adaptive Value of Fever