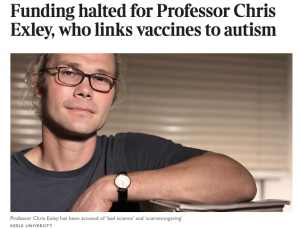 The following is a personal response from Dr. Dale regarding the recent article posted by The Times (United Kingdom) regarding a controversial British academic who claims childhood vaccines can cause autism and has been blocked from raising research funds after protests by other scientists.

Dr. Dale: Science is supposed to speak for itself. If these so-called protesting “scientists” were real scientists, then they would test Exley’s theories/findings and publish their results. Thus, allowing science to speak for itself. In this instance, they are merely protesting to silence the man by removing his ability to make a living. Reminds me of the quote by George R.R. Martin, in A Clash of Kings— “When you tear out a man’s tongue, you are not proving him a liar, you’re only telling the world that you fear what he might say.”

Professor Chris Exley, of Keele University, infuriated health experts by telling parents the aluminium in vaccines given to babies to protect them from diseases such as whooping cough, and in the human papillomavirus vaccine given to teenagers, may cause “severe and disabling” autism. It echoes the “anti-vax” controversy surrounding Andrew Wakefield, whose 1998 claim that the MMR (measles, mumps, and rubella) vaccine caused autism led to a fall in immunization rates.

Dr. Dale: This actually lead to a pretty unique situation where research, published in a peer-reviewed journal, notes that “During the same time period, the average autism spectrum disorder prevalence in the United Kingdom, Norway, and Sweden dropped substantially after the birth year 1998 and gradually increased again after the birth year 2000.” Thus, giving substantial scientific evidence of a causal association between the MMR vaccine and autism.

Supporters of Exley, a professor of bioinorganic chemistry, turned to crowd-funding site GoFundMe to raise cash after his grant applications were refused by scientific research councils.

The 112-Year Odyssey of Pertussis and Pertussis Vaccines-Mistakes Made and Implications for the Future.

Research misconduct identified by the US Food and Drug Administration: out of sight, out of mind, out of the peer-reviewed literature.