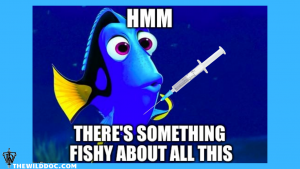 While it may seem “nice” that the government is buying flu vaccines with our tax dollars and then giving them to people for “free,” I urge people to really seek the truth behind this.

The reason I wanted to discuss this topic is because when presenting the science and evidence that the flu vaccine does not protect people from the flu or that the flu vaccine actually causes harm, I will often get the response, “so, if it doesn’t work, then why does our government give the flu vaccine out for free?” As if the government only ever does what is in the best interest of the people rather than the profits of big industry, especially the industry with the most lobbying money… Politicians would never let money cloud their judgment when it comes to the health and safety of the people, right?

Think about the following points:

Just with these few points, we should all be able to see that we cannot discard the “chance” that money is at the root of why our government is giving away “free” flu vaccines.

What do you think is the real reason flu vaccines are being given away for “free?”

Is Forcing the Flu Vaccine on Hospital Staff Scientifically Justified?