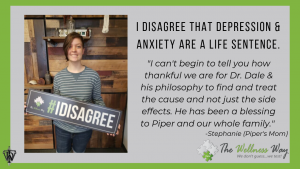 Piper has always been a meek child, not one to go outside and make friends. If other kids tried to make friends with her she did not reciprocate. She was very easily upset and would cry at the drop of a hat. When I ask the Drs during her toddler years they just brushed it off as the Terrible Twos or a dramatic toddler. As she got older the symptoms progressed and new symptoms started to emerge. Instead of just staying inside when her siblings and other neighborhood children were out playing she was now staying in her room. She was barely talking to us or joining in during the family fun time. She was moody and would snap at us for no reason. Medical doctors suggested a mild anti-depressant but having been on those myself when I had post-postpartum depression, I was concerned. I had read the drug information sheet that is given to you when you pick up your prescription and knew what the side effects were. It was also during the time when a few teens had been in the news because their anti-depressants had caused them to commit suicide. I wanted to try a few natural supplements first. I started her on St. John’s Wort, Fermented Cod Liver Oil and probiotics. They helped but it still didn’t fix the problem and as she matured she was getting worse.

During puberty, we started noticing new things like her wearing her hair in her face as a way to avoid people if she had to go out. If someone spoke to her directly she would get a wild, deer in the headlight look on her face and not even respond to them. She stopped looking people in the eye and only left the house when she was required to leave. She started self-harming by grabbing the skin on her forearms and tearing at them or pulling her hair by the roots. Another coping mechanism she would do, after we learned American Sign Language as a family, when she was spoken to she would respond with the deer in the headlight look but then turn to me and start signing for me to interpret. The people speaking to her weren’t strangers, they were family friends. She KNEW these people and still couldn’t bring herself to talk with them. She once told me that it was like she had a meter when she went out. The more people she had to talk to or how busy the store or place was would fill her meter. Once her meter was full she was DONE. She had to go home and be alone in order to decompress and be able to deal with life again. She was crying now anytime I tried to talk with her and I had finally resigned myself to the fact that I would need to make an appointment with her PCM to see about putting her on an antidepressant for her anxiety, depression and self-harm and a referral for a therapist.

I was at Dr. Dale’s office for an appointment for me and on a whim, I asked him about Piper. I explained a little of her situation and he felt sure he could help her. On Piper’s first visit to Dr. Dale, she kept her face down and wouldn’t make eye contact. I think she cried the whole consultation while being asked for her history. Dr. Dale wanted to start her on adjustments right away and gave me a list of supplements to start her on as well as suggesting we test her for food allergies. She started taking CBD oil and adjustments while we waited for the allergy test results. Within a month she was better. Before it was rare for her to have a good day, now we were having as many good days as bad days. We got her allergy test results back and she had twelve allergies listed. We got her off the foods that were causing inflammation and started seeing even better results. We also noticed that if she ate any of her triggers she would react by one of three ways depending on what she ate. She would either get really sad, very angry or extremely tired. We started a couple more supplements, Alcedonia and Restore. We saw a huge improvement with Restore, even better than the results we saw with probiotics.

Almost a year later, I have a life-lovin’, sassy fifteen year old who is a lot of fun. She’s cut her hair into a cute Pixie cut, no longer hiding behind it. She’s not only made a few friends but she initiates contact with them. She’s joined a scouting group and doesn’t shy away from people, friends or strangers alike. She always dropping a joke now, puns are her favorite. She’s even taking better care with her appearance and not trying to hide herself in her clothes anymore. She rarely has a bad day anymore. If she does it’s usually from her eating food that she has an allergy to. Even then we’ve noticed since starting to heal her gut her reactions to the foods aren’t as bad anymore.

I can’t begin to tell you how thankful we are for Dr. Dale and his philosophy to find and treat the cause and not just the side effects. He has been a blessing not only to Piper but our whole family.

Looking to start The Wellness Way Approach to health? Ready to find the underlying cause of your health problems? “We don’t guess..we test!”