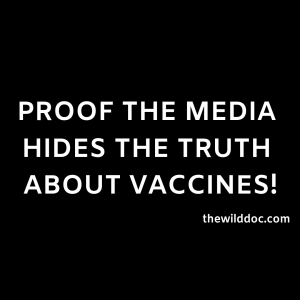 I want everyone to make up their own minds! Did News Channel 5, out of Nashville, and reporter Matthew Torres mislead and hide the truth from people when they aired less than 30 seconds of an entire 12+ minute interview that they recorded with Dr. Dale. The title of that fake news report is “Small number of measles cases stand to cost the state millions”

Matthew Torres and News Channel 5 hid all of that and more from people who deserve to know the truth.

You will see that Matthew Torres ignored every legal and scientific document that Dale shared with them. They took only the very brief moments of the interview where Dr. Dale shared his opinion while ignoring the facts that the vaccine and pharmaceutical industry, as well as government bodies, like the CDC and the Department of Justice, are lying to the American people about vaccines.

If you would like to watch and read the misleading “news report” aired by News Channel 5, click here:

Then if you would like to watch the real interview, watch this video in its entirety.

Below is a full list of the research articles or legal documents Dr. Dale shared with Matthew Torres and decide for yourself if you believe that the media is hiding the truth from people about the safety of vaccines and the criminal action by many in the medical industry to conceal the truth!

Let us know what you think in the comments and SHARE SHARE SHARE so we can get the REAL and FULL truth out there and our voice will be heard above the lies and deceitfulness of the mainstream media.

**This screenshot below is a conversation between Matthew Torres showing that he told us he “wanted to hear from someone on why they think vaccines are dangerous.” But as you can see in the aired interview he chose to pick out Dr. Dale’s opinion and didn’t publish why vaccines are dangerous. He totally disregarded ALL the facts and documents that were said and shown in the full interview. 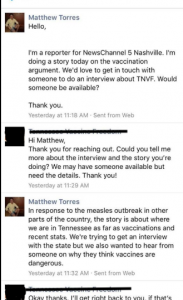 Is Big Pharma Addicted To Fraud?

Centers for Disease Control and Prevention: protecting the private good?

Poul Thorsen, CDC Scientist and US Fugitive for Fraud and Money Laundering

Mumps and ovarian cancer: a modern interpretation of a historic association